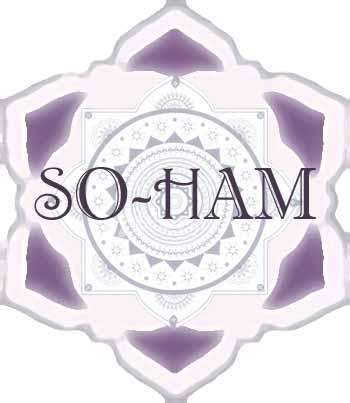 Natural mantra: The Soham mantra is a natural mantra because it is already part of your nature.

Other names or designations: The mantra is also designated as Hamsa, Hansa, Sohum, So Ham, or So Hum.

Hamsa mantra: The Soham mantra is also called the Hamsa mantra. Hamsa (or hansa) poses the question, Who am I? Soham provides the answer, I am that.

The finest bridge between body and mind: Breath is a bridge between the body and the mind. When trying to meditate it is extremely common to have tension in the muscles and noisy thoughts in the mind. The nervous system is the arbiter between the tense body and the noisy mind. One of the best ways to regulate that nervous system, and in turn the body and mind, is through the breath. This has been known by the Yogis for thousands of years, and has also come to be widely known in recent years by the modern medical and psychological community.

Value of Soham and breath: One of the finest, easiest, and most direct ways to train the breath, and in turn, regulate the nervous system, relax the body, and quiet the mind is through Soham mantra practiced at a steady, slow speed, with exhalation somewhat longer in duration than the inhalation. Click here for an online practice of Soham Meditation, or here for a CD of the same practice.

Soham and diaphragm breathing: The Soham mantra is extremely useful when practiced along with diaphragmatic breathing. Allow your attention to rest in a space about the size of the palm of your hand, just below the breast bone, at the upper abdomen. As you exhale with Hummmmmm, be aware of how that space gently pushes in, so as to exhale completely. As you inhale with Sooooooo, be aware of how that space move moves back outward, and how the lower ribs flare slightly outwards, to the sides. Allow the breath to be smooth, with no jerkiness. Allow it to be comfortably slow, and have no pauses between the breaths. Exhalation gently rounds back into inhalation, and inhalation gently rounds back into exhalation. This may be done either in a seated meditation posture or lying on your back in the corpse posture.

Soham in breath along the spine: One of the deeper ways to use the Soham mantra is through spinal breath, by coordinating body, breath, and mind (Such practice has been popularized as a part of kriya yoga or kundalini yoga, though it is universal practice). As you inhale, allow the mind to be aware of the vibration Sooooooo as your attention moves upward along the subtle cord of the spine (sushumna), through the chakras towards the crown of the head. As you exhale, allow the mind to be aware of the vibration Hummmmmm as your attention moves downward along the subtle spine towards the perineum at the base of the spine, at the flat place between the genital area and the anus. Be aware of a thin, steady stream of energy and consciousness flowing up and down between this area near the base of the spine and the crown of the head. You may or may not be literally aware of the stream, and you may or may not experience it as a milky white stream of light. However you experience this flow is okay, and you will find it is a very beneficial meditation practice.

Soham at the nostrils: Meditation with Soham at the bridge of the nostrils is a very effective practice that stabilizes and purifies the mind, training the mind in one-pointedness. Meditation on the gross breath leads to awareness of the subtler energy of prana, and then to deeper meditation beyond. Focus attention on the feel of the breath, the cognitive sense of touch, as it flows in and out, remembering the vibrations Sooooooo and Hummmmmm. Gradually allow the exhalation to elongate, becoming twice as long as the inhalation.

Systematic practices: The three methods described above can be used in order, going from outer to inner, from gross to subtle.

By doing the practices in this order, your attention moves systematically inward, through the dimensions, to one-pointedness. After these three, you may want to move your attention to the space between the breasts or between the eyebrows, depending on your predisposition, using whatever mantra or focal point you normally use for meditation.

Steps of practice: While the Soham mantra can be used alone, it is most effective when practiced in conjunction with the other steps of meditation, including stretches or hatha postures, survey of the body or relaxation, and a variety of breathing practices.

Listening and remembering versus speaking: The vibrations of the Soham mantra are allowed to arise in the mind field and to repeat themselves. While you might initially be using your will power to remember the mantra, it gradually will be noticed more automatically, somewhat like a song or an advertising slogan might start to repeat in your mind. Though you may not be literally hearing an audible sound of the mantra, the stance of attention is more like listening or remembering than it is one of speaking the mantra.

Japa and ajapa japa: Recitation of a mantra is called japa. When that remembering comes automatically, it is called ajapa japa, meaning that the repetition called japa is coming without effort. A still subtler meaning of ajapa japa is having a constant awareness of the felt or experiential meaning of the mantra. In the case of Soham mantra, it means a constant, pervasive awareness of the flow of subtle energy related to the mantra and the exhalation and inhalation. At that point, the gross level of the syllables of the mantra may or may not still be there.

Counting the mantras: While it is not at all necessary to count the repetitions of the mantra, it can sometimes be comforting to do so. It also can give some definition to your practice, particularly if the mind has a habit of wandering and wondering about length of time of the practice. The typical set of mala beads has 108 beads. By counting one bead per breath, it takes about 15-20 minutes or so to complete one round of the mala. A single round with the mala can be a useful preparation for meditation without the counting. To develop stability in your mantra practice, it can be useful to do an intentional practice of one mala (or other number) per day for a period of 40 days, or perhaps one year, starting and ending on some significant date.

Songs within: There are many songs being played within, but they are seldom noticed. The heart sings a song that resonates throughout the body. The brain plays steady notes that can be heard when we are still. The breath sings a song, so-hum, so-hum; over and over, it sings the song of the Soham mantra. We are so busy, so entangled in the external world that we never take the time to listen within, to hear the natural melodies that will guide us still further inward to the finer music of consciousness. This is not mere poetic reflection; it is the truth. The inner vibrations of Soham mantra can be felt, heard, and experienced at ever subtler levels. The vibrations themselves are the guides.

Use the sound, not the word: For meditation, one might begin by using the word and reflecting on it’s grosser meaning. One might think of so-hum as the literal sound that can be heard by listening to the passage of air at the nostrils. However, the deeper, truer practice for the student of meditation is to seek the subtler level of the Soham mantra, and go into the sound itself, allowing it to become the guide, leading attention further inward. Words surely have their place in relation to the external world, but the sound vibration itself is a finer, more powerful guide within.

Attention is required: There is one skill that is of utmost importance to meditation, and that is training the attention. It means developing a steady, unbroken relationship with the so-hum of the breath, regardless of the other activities of the mind. It is not about repressing thoughts, but is more like listening intently to the whisper of a beloved friend in a crowded room. It is your conviction to attention that makes the voice clear, not the elimination of the other people. So too, the thoughts of the mind are allowed their life, as you listen passionately to the so-hum, so-hum of the breath ebbing and flowing through the gross and subtle bodies, and the mind.

Balancing chakras: By training the breath with Soham mantra, moving the attention up and down the central channel of sushumna, the chakras through which sushumna travels come into alignment or balance. This brings the mind into a pleasant, peaceful state that is preparation for advancing into the depths of meditation. The Soham mantra is a simple, straightforward method that can be done by virtually all people.

Blow on the fire to make it burn: The latent spiritual energy of kundalini is to be awakened by stirring that fire of kundalini-shakti. The breath, though actually a result or manifestation of the kundalini, is a means of awakening the fire. By blowing the vibration so-hum, so-hum, the Soham mantra is like gently blowing on a glowing ember. Gradually and surely, the glow turns into a fire, growing ever bigger, ever brighter.